Tyler Gilbert is a rock recording artist and singer/songwriter. He began his career over 20 years ago and has since then released to date 5 albums and 2 EP’s to his current album “Kill the Magic” which was released by Wormholedeath. Gilbert has toured all across Canada and USA, performing at festivals including; Ohio State Far, Burlington's Sound of Music, Canadian Country Music Award Festival, World Women's Curling Championship, May Run Music Fest, Winnipeg Fringe Fest, International Folk Alliance and the Canadian Western Agribition. His music receives regular airplay on CBC, Sirius XM and digital radio stations around the world. His song ``Letting Go`` was featured in Fox Business TV show ``Billion Dollar Idea``. Winner of “Best Song from Solo Artist” in the 2020 Banger Music Awards and 2022 Josie Music Award for "Rock Artist of the Year". Nominated for 2 SaskMusic Awards, 11-time nominee for the Josie Music Awards in Tennessee and 2-time nominated for Banger Music Awards. His music is described as a blend of Alice In Chains, City & Colour and Soundgarden.

"Ghost Behind Your Mind" recent achievements:

Tyler was born in Calgary, Alberta in 1988. Growing up Regina, Saskatchewan he crafted his song writing skills by recording over 8 multiple song demos from 2003 to 2007.

In 2008 he formed 3 piece rock band VOS with John Buhr and brother Aaron Gilbert which helped sculpt what would become their debut EP "Vos" released in October 2008, produced by Brad Papp. The song “Prison Wall Blues” remained for 16 months on the charts of “Saskatchewan Top 30”. Over the next few years they would play shows locally around Regina, until they disbanded in 2009.

After the break up of VOS, Tyler went on solo and independently released his 2009 album “The Re-session” The album got its name from its relatively small budget. The overall sound and feel of the album is a bare bones singer/songwriter approach, using mainly acoustic guitars and single track vocals. Tyler began touring within Western Canada to help promote the album.

In 2011, Gilbert's 3rd studio album "Tyler's World" was released world-wide on Farmageddon Sound and the video single “Break Free” premiered on Global Regina TV and received moderate commercial airplay within Canada as well as “Song of the Day” on songshooter.com for Sept 26, 2012. The album garnered media attention and later won him the Rawlco radio's 10k20 grant. The style of the album continued with the raw singer/songwriter feel but included more harmonies and electric guitar than the previous album. This was produced by Justin Bender and was the first album of their working relations. Over the next few years Tyler stayed busy touring across Canada and select US states tour with support acts Megan Nash and TB Judd on select legs of the tour. He also performed at festivals such as Canadian Country Music Awards, Winnipeg Fringe Festival, Chaplin and Herbert Centennials.

During this time, Gilbert’s lyrics were used in the World Wildlife Federation “Earth Hour” song. He also made is acting debut in Discovery Channels series “Deadly Intent”. Appearing also on Shaw TV’s one hour episode of “Stripped Down” in 2012.

In 2013, after a busy couple years Tyler released his standout album “OK Murphy”, a perfect balance on the 13 tracks set between the acoustic folk/rock of his past and the electric-driven rock of his roots. This was his first album to feature full band, featuring drummer Jayson Brinkworth on drums, Rob D on bass. Producer Justin Bender was brought back to produce Tyler’s 3rd studio album released under Farmageddon Sound. The album spawned 3 popular singles, with “Continuously” receiving moderate airplay on adult contemporary commercial radio stations and the music video was premiered by BlankTV, “Mornin’ Sunlight” received a lot of airplay on Canadian Country radio and CBC stations and “Lady of the Mountaintop” what would become Gilbert’s bestselling and most popular song to date. “Lady of the Mountaintop” would go on to receive heavy rotation on Canadian Country radio as well as Sirius XM and CBC radio. The song also reached #9 on DMDS’ “Most Active Indies” on January 4, 2016.

Tyler was a nominated finalist for the Regina Mayor Arts & Business “Emerging Artist” Award. Immediately following the release Gilbert hit the roads in one of his busiest years, playing countless shows and performing at top notch festivals such as Cathedral Village Arts Festival, All Folked Up In Montmartre, Regina Rams Half Time, Estevan Art Gallery 35th Anniversary, Festiv-ale, Canadian Western Agribition, Saskatchewan Country Music Awards, Midsummer Arts Festival, Kinsmen Telemiracle, Broadway Festival and the Festival of Words. Tyler was brought on to perform song writing workshops as part of the SCES Workshop Tour which travelled to schools all across Saskatchewan. Also in 2013 he teamed up with Regina hip hop act Thunderhawk and Shayne Hawken to independently release the single “Awakening at the End”.

It was in this time frame when Gilbert joined prog metal group Third Ion, which consisted of Justin Bender, Aaron Edgar and Mike Young. In 2014 they released their debut album “13/8Bit” which was release worldwide on Glasstone Records, Peaking at #14 on iTunes Metal Charts, the album was fully embraced by press across the globe, receiving 9/10 at metal.de, 8.5/10 in Aardshock Magazine, as well as featured streams at Bravewords.com, and Metal Hammer Norway. Third Ion completed their first tour of Western Canada, which was well received by the metal community and industry. Unfortunately, shortly after the release of “13/8Bit”, Gilbert decided to leave the band to continue focusing on his own original music.

2015 proved to be another busy year for Tyler, riding the success of “OK Murphy” he would showcase through BreakOut West at Folk Alliance International and toured extensively within Canada and the USA, receiving the attention of multiple newspapers and music news publishers. Performing at the Regina International Film Festival and Awards later that year, he also received endorsements from Steve Clayton USA Picks and Shubb Capos.

Tyler remained busy come 2016, even appearing as the vocalist in The Co-operators radio commercial "A Better Place To Be". In May Tyler signed with GVG Records to release his full band 11 track studio album “The Montana Kid” world-wide, funded in part by Creative Saskatchewan. The title of the album is a nod to his father. Produced again by Justin Bender, the album showed a new side to Gilbert’s music with hints of his country music influences the album received the attention of the country music community. The single “Stains” received moderate airplay on commercial Country radio in Canada. The album reached #9 chart position on CJTR.

Tyler appeared as a guest vocalist on Daniel Besuijen’s 2016 album “The Witch Riding Your Back”. He also appears on CJTR’s “Got It Covered” compilation covering one of his early influence’s songs “To the Lady Downstairs” by the Bull North. "Stains" would later be featured on SaskMusic's InTune compilation.

In early 2017 his song “Mornin’ Sunlight” was used in the Case Martingale "Unique Gifts" Compilation. Gilbert has announced that he will be releasing a rock album later this year with international tours to follow.

The Walleye - Thunder Bay, ON - http://issuu.com/TheWalleyeMagazine/docs/walleye_sept2011_final_lores/17 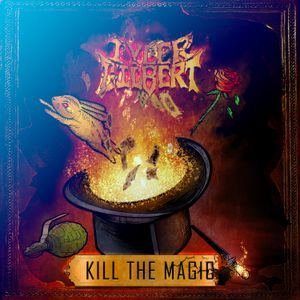 "KILL THE MAGIC" In stores Now!